Unmanned aerial vehicles have reportedly hit targets inside a major airbase in Iraq’s western province of Anbar, which houses American military forces, who are in the Arab country on alleged training and advisory missions.

Citing a security source speaking on condition of anonymity, the Arabic-language al-Sumaria television network reported that two combat drones had hit targets inside the Ain al-Asad airbase, located about 160 kilometers (100 miles) west of the capital Baghdad, early on Friday.

There were no immediate reports of damage or casualties.

The report added that counter-rocket, artillery, and mortar (C-RAM) systems managed to intercept the aircraft.

No group has claimed responsibility for the attack yet, which is the latest in a series of strikes targeting US occupation forces over the past few months.

Four US troops were injured on Thursday after rockets hit a base housing American forces in Syria’s eastern province of Dayr al-Zawr.

The rockets struck two support buildings at the Green Village base, which is run by the so-called Syrian Democratic Forces (SDF), a US-allied, Kurdish-led militant group.

“At this time, four US service members are being evaluated for minor injuries and possible traumatic brain injuries,” the US Central Command (CENTCOM) said in a statement.

Back on January 28, several rockets struck a major base at Baghdad International Airport, where American military forces and trainers are stationed.

Sabereen News, a Telegram news channel associated with Iraqi anti-terror Popular Mobilization Units (PMU) reported at the time that at least six projectiles had struck the Victory Base.

An airbase housing US military forces and warplanes in the north of the Iraqi capital was also hit by drones on January 15.

Sirens immediately sounded at the base, and the sound of gunfire could be heard from the site, it said.

The attacks come amid growing anti-US sentiments over Washington’s military and political adventurism in the region and coincided with the second martyrdom anniversary of Iran’s top anti-terror commander Lieutenant General Qassem Soleimani in a US drone strike in Iraq.

General Soleimani, the commander of the Quds Force of Iran’s Islamic Revolution Guards Corps (IRGC), and his Iraqi comrade Abu Mahdi al-Muhandis, the second-in-command of Iraq’s Popular Mobilization Units (PMU), were martyred along with their companions in the drone strike, authorized by former president Donald Trump, near Baghdad International Airport on January 3, 2020.

Both commanders were highly revered across the Middle East because of their key role in defeating the Daesh (ISIS) terrorist group in the region, particularly in Iraq and Syria.

Five days after the assassination, in a military operation codenamed Operation Martyr Soleimani, the IRGC launched a volley of ballistic missiles at the Ain al-Asad airbase.

Iran said the missile strike was only a “first slap” in its process of taking “hard revenge” and that it would not rest until the US military leaves the Middle East in disgrace.

Back in January 2020, two days after the assassination, the Iraqi parliament passed a law requiring the Iraqi government to end the presence of the US-led foreign forces in the Arab country.

Since the assassination, Iraqi resistance forces have ramped up pressure on the US military to leave their country, targeting American bases and forces on numerous occasions, and at one point pushing the Americans to ask them to “just leave us alone.”

Last year, Baghdad and Washington reached an agreement on ending the presence of all US combat troops in Iraq by the end of the year.

The US military declared the end of its combat mission in Iraq in December 2021, but resistance forces remain bent on expelling all American forces, including those who have stayed in the country on the pretext of training Iraqi forces or playing an advisory role.

3 martyred in car explosion near Hadrat Abbas shrine in Karbala 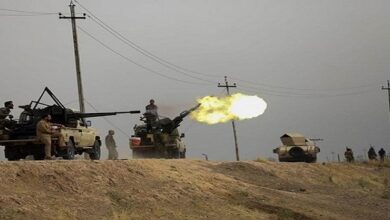