The representative of the Iraqi Supreme Religious Authority (Marja) has warned against the shift in protests from a peaceful nature to the chaos that will trigger foreign interference.

Sheikh Abdul Mahdi al-Karbalaei, the representative of the Iraqi Supreme Religious Authority in his second sermon in the holy city of Karbala’s Prayer, referred to as the Marja Sermon, read a statement by Ayatollah Sistani office and referred to ongoing protests in Iraq against corruption and inefficiency, called upon the protesters and the security forces to adhere to the peaceful framework of the protests and not to trigger violence, insurgency, and destruction.

The Marja of Iraq urged the demonstrators to refrain from approaching any encroachment on the security forces, as well as emphasizing the prohibition of demolishing the public and private property and called on government or private buildings or anything not to be attacked.

The statement added, “Violation against security forces and police by throwing stones or flaming bottles or anything and damaging public and private property by burning or looting and destroying it have no legal and legitimate authorization and also contradicts the peaceful nature of the demonstrations and deters the protesters from achieving their legitimate demands, as well as prosecution of the violators is pursued.

Ayatollah Sistani’s office said in a statement, “We also remind the security forces that peaceful demonstrations that do not disturb public order are guaranteed by the constitution and that they must fully protect the demonstrators in the streets and squares designated to this end, and refrain from engaging with protesters.”

“The security forces must have the highest degree of patience while exercising their duties within the law and order and not allowing chaos and encroachment on public and private property,” the Iraqi Supreme Religious Authority added.

The statement emphasized that the Iraqi Marja stresses the need for peaceful demonstrations and to stay away from violence, not only because our children were not harmed by the protesters and security forces, but also because of the special emphasis of Marja on the future of the country.

The Statement has underlined that Iraq suffers from many complexities and there is a concern that it will escalate into violence and mutual violence, causing chaos and destruction, thereby providing a basis for further foreign interference and turn the country into a field for intervention of international and regional forces and, like some other countries, lead Iraq into an uncertain future that could not escape its consequences even after many years.

Noting that genuine reform and a desirable change in the administration of the country should be achieved through peaceful means, the Supreme Religious Authority of Iraq emphasized that this would be fully possible with the unity of Iraqis and they unite around specific goals. 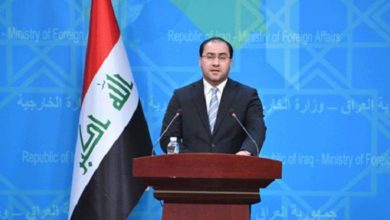