Outlawed Sipah Sahaba ASWJ terrorists too out an anti-Shia rally in Shahdadpur district of Sindh province.

Ironically, they publicly made hate speeches and hatemongering fanatics and their clerics also declared Shia Muslims as heretics.

Outlawed Lashkar-e-Jhangvi is subsidiary of ASWJ (Sipah Sahaba) and together they (LeJ and ASWJ) both are mother of all terrorism in Pakistan.

They use the Sunni sanctities as cover for their terror attacks and hatemongering. In Shahdadpur, they claim to take out rally on anniversary of assassination of Hazrat Usman.

As a matter of fact, Deobandi scholar Syed Abul Aala Moudoodi had mentioned the names of those who played part in killing of Hazrat Usman (Uthman).

Mr. Moudoodi elaborated this under subtitle No.8th End to Supremacy of Law (during the reign of Muavia).

While citing narration from old Islamic history books, he wrote that beheading began under the rule of Muavia.

He further wrote that Amr bin al Himaq was a companion (Sahabi) of the Prophet Hazrat Mohammad (PBUH) who participated in murder of Hazrat Usman.

Someone beheaded this Sahabi (companion) although he had earlier died of snake-biting.

The head was sent to Muavia in Damascus. There, the regime first displayed the head in public and then threw it in the lap of the wife of the Sahabi Amr bin al Himaq.

And he and his hate mongering outfit deceived people in the name of Sahaba because Sunni Islamic history named Sahaba (the companions) of Prophet Hazrat Mohammad (PBUH) as the killer (s) of another Sahabi (the companion) Hazrat Usman.

Uthman (Hazrat Usman) had ruled Muslims as third ruler since the passing away of Hasrat Mohammad (PBUH) after Hazrat Abu Bakr and Hazrat Umar.

Hence, Sunni clerics should tell common Sunnis who assassinated Hazrat Usman. If Sipah Sahaba or ASWJ stage rally against Sahaba who participated in the murder? Were those Sahaba (the companions) were Shia Muslims?

Why don’t ASWJ condemn killers of these Sahaba

Sunni historians also named Mohammad son of the first Caliph Hazrat Abu Bakr among those participated in the murder of Hazrat Usman.

Factually, Sunnis themselves hurl these charges against Sahaba and then blame Shias for not respecting Sahaba. It is unjust and unfair.

Due to aforesaid reason, Shia Muslims don’t recognize all Sahabis (Sahaba, the companions) as source of guidance or leadership. Because, Sahaba themselves had not tolerated one another and had remained engaged in bloody battles. 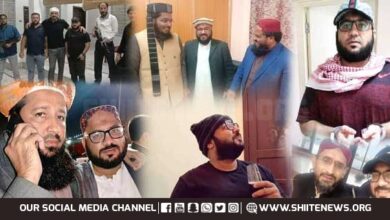